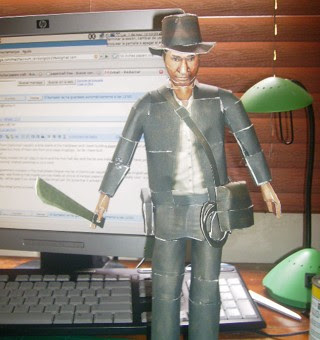 15-11-2007: I only uploaded my Indiana Jones model a couple of days ago, and already I received this picture from Guillermo, after he only started working on it yesterday!

03-11-2007: Guillermo proves again that he is a very fast builder: he built this papercraft Lara Croft in only 1 day!

Guillermo Molina Mueses from the Dominican Republic in the Caribbean built this Rikku in only 5 hours, and Auron took him only half a day to build!

What’s more, he has only been building paper models since April 2007, and he has already built many models, as you can see on his own Bongo Papercraft blog.