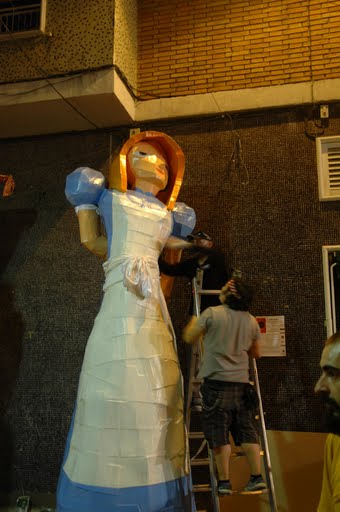 19-08-2009: it looks like Alice donned her classic look for the festival! If you want to see more pictures of Carrer de Bruniquer transformed into Alice’s Wonderland, check out Victor’s slide show of the festival here (Google has dismissed the Picasa webalbums unfortunately)

03-08-2009: If you happen to be in Barcelona during the Festa Major de Gràcia this year (15-21 August 2009) then be sure to visit Carrer de Bruniquer: in this street, you will be able to encounter a 3,5 meter tall incarnation of my American McGee’s Alice model!

Victor and several people from Barcelona’s Gràcia district are making it as part of the decorations for the festival for their street, which will have an Alice in Wonderland theme.

They’re making it out of cardboard, because even thicker paper won’t be strong enough for a model this big! To enlarge the parts from the original model, they projected the parts onto a wall and traced them with a marker.

You can imagine it’s a big project, so not something Victor can do on his own; but when it comes to preparing for a party, you’ll find there will always be people willing to lend a helping hand: picture 1 | picture 2 ;o)

Thank you for building a Ninjatoes’ papercraft model and have fun partying! ;o)