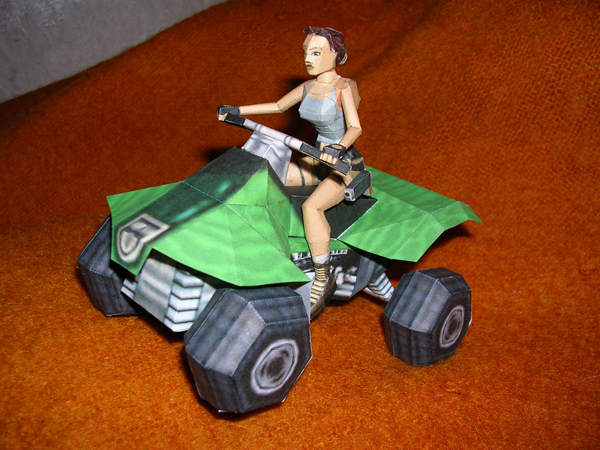 21-01-2011: Here’s another Lara Croft built by TR-maniac; this time it’s the Tomb Raider III version on her jungle quadbike riding down a muddy slope! ;o)

And although every Tomb Raider fan knows of course that the quad bike can run over most enemies no problem, TR-maniac decided that Lara mustn’t be unarmed even when driving, so he made his own Dual Pistols for Lara: picture

At first he also wanted to make Lara’s braid, but he found it would be too small to build, because Lara herself had to be quite small to fit on the quad bike…

It made some parts quite difficult to build enough already he says, but I think he did a great job!

23-08-2008: There’s only one picture of TR-maniac’s Tomb Raider Legend Lara Croft paper model here, but don’t worry, because you can see a few more pictures of her in his DeviantArt gallery!

At first (being a TR-maniac ;o) he just wanted to have his own Lara Croft statue, but he quickly became obsesed with papercraft and now it causes him some sleepness nights every now and then…

Sorry about that… ;o)