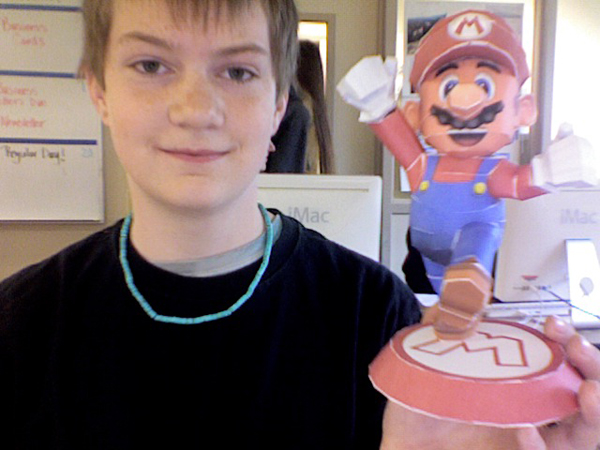 16-05-2011: Aaron found some time again to do some more papercrafting this weekend, and he decided to build my 3D Paper Mario!

The picture was taken in computer class: Aaron’s classmates (and his teacher ;o) are always very impressed whenever he brings with him another one of his builds! ;o)

09-05-2011: After all the Zelda models that Aaron built earlier, this time he made an Advance Wars unit!

Although he never played the game, he liked the look of the Orange Star Fighter I made recently, so he decided to printed it off and and build it! ;o)

His pictures really show the scale of my papercraft Advance Wars units, most of them easily fit your hand: picture 1 | picture 2

This has its advantages, of course: for instance, you don’t have to invest in expensive Anti-Air units and Missiles anymore, since you can just pluck enemy Fighters from the sky should they be foolish enough to attack you: picture ;o)

Although I really made her to fit on the back of wolf Link, Aaron tells me she is also quite comfortable on the armrest of the chair that he made himself: picture

20-12-2009: Aaron’s thirst for Zelda models is far from satisfied yet, as he also built Hero outfit Link now! Here he is together with Zora armor Link, and here’s a picture of it alone.

22-10-2009: Two new models by Aaron Mears! The first one is princess Zelda, and the second one is wolf Link. Aaron has been working on them off and on all during summer break, and a month into school. So that’s how many Zelda models already? Well, you can see in this groupshot!

01-07-2009 Aaron promised me he’d send some new pictures, and here they are! The first one is a rebuild of young Link that he did earlier. I guess he just wanted to make it *perfect* (and now he also repainted the sheeth to make it look like the blade of the sword! ;o)

The second one is Fierce Deity Link. You can see another Fierce Deity Link in super deformed style in the picture, it’s a repaint of ChokiPETA’s Four Swords Link and can be downloaded from here.

The final one in this update is my newest model, Zora armor Link. I’m very glad to see that most people find it relatively easy to build, and the results like this one are usually great as well! ;o)

17-05-2009: I guess Aaron forgot to mention he also built my Epona & Link models! ;o) You can see them here, together with young Link and another Link from a different papercraft creator (which you can download here). If I remember correctly, it was made with Tenkai, the predecessor of Pepakura Designer.

And that concludes the random trivia lesson for today. ;o)

10-05-2009: Aaron sends me a few pictures of the young Link papercraft model he built. The small treasure chest he’s trying to open in this picture, can be found here (but it’s probably just another Small Key again, that you can only use in this dungeon… ;o)

Aaron also built the Clock Town Schnauzer model from my website. When Link is transformed into a Deku Scrub, it growls at you and attacks you, but after Link is transformed back to normal, the both of them get along just fine, as you can see in this picture.

The last picture shows that when Link is not playing with dogs, he likes to play King Arthur and pull swords out of stones. If you want to try yourself, you can download the template for the Master Sword and pedestal here.