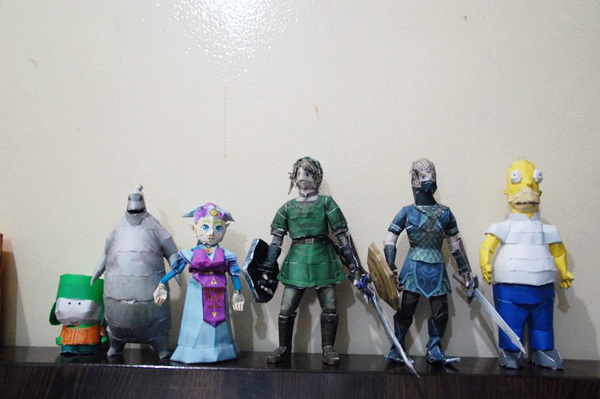 30-05-2011: Another picture of Khalid; he has built quite a few paper models already! From left to right, they are:

Who knows what he may built next! ;o)

20-05-2011: Khalid is a fast builder! While he was waiting for me to post his pictures of Twilight Link, he already made another paper model: Oogie Boogie!

Here are two pictures of both of them together: picture 1 | picture 2

And here’s also one of Oogie Boogie alone: picture

Although I did make Oogie Boogie a bit easier to build than Twilight Link, Khalid must still have worked pretty fast to finish it so quickly! ;o)

18-05-2011: This papercraft Link from The Legend of Zelda: Twilight Princess was built by Khalid.

Khalid had some trouble to get the small fingers right at first, but as you can see in the picture, in the end he really did to do a very good job on them, so that Link can hold his Master Sword and Hylian Shield!

He showed me several more pictures, including these close-ups of Link’s upper body and head: picture 2 | picture 3

So luckily, Khalid didn’t give up on making the fingers, and I think he can be very proud of his papercraft Twilight Link! ;o)