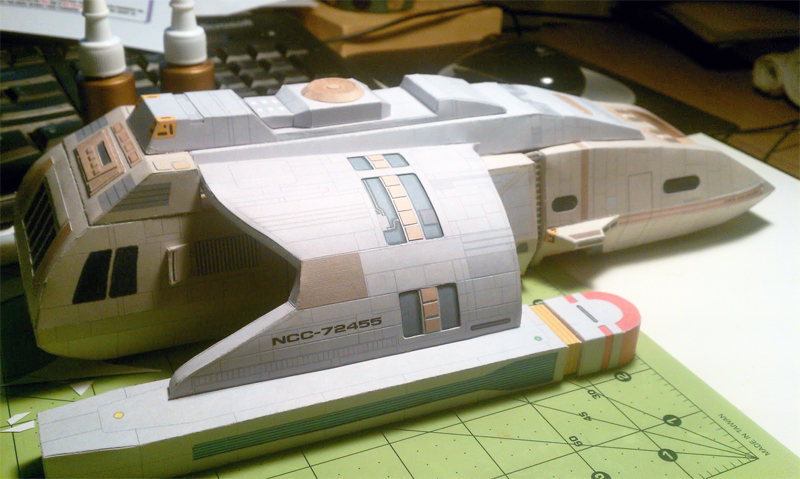 22-06-2012: What started as a digital repaint of my Star Trek Danube-class runabout, quickly became a big project with Paul not only repainting the parts, but also tweaking them to get the model exactly the way he wanted: picture

Some parts even took him several tries to get them *just* right (picture) and what’s more, he included markings for 14 (!) different versions! But there’s so much to tell about this repaint, you should really visit Paul’s Rosco Files weblog to read all about it: link

Parts and instructions to build your own repainted version are available here (together with my original hand drawn version) and on Paul’s own weblog here.

If you visited my papercraft Star Trek page, you might recognize his name: he repainted my Type-10 shuttlecraft “Chaffee” before, and now he is doing the same for my “Rubicon”!

As you can see, he built my original version first, and was surprised (shocked? ;o) to see how big it was (apparantly, it’s almost as big as the studio model! ;o)

And he’s not just repainting it, he’s doing a lot more than that! You can read up on it on his own weblog, The Rosco Files: link

It’s not quite done yet, but if while you wait you want to get an idea of what you can expect, have a look at the “Chaffee”: link

Thank you for building (and repainting ;o) a Ninjatoes’ papercraft model!

Posted on June 23, 2012, in Hall of Fame and tagged papercraft, Star Trek. Bookmark the permalink. 1 Comment.