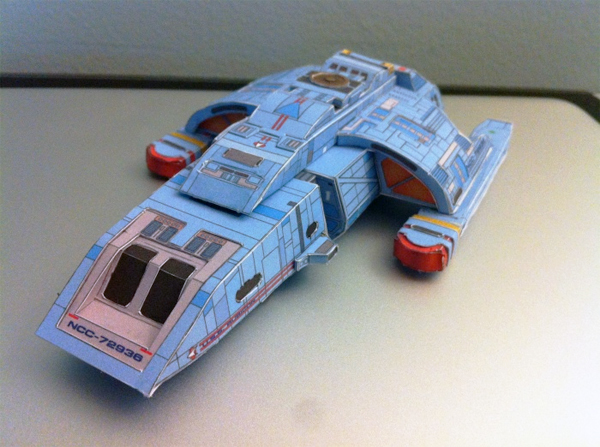 22-08-2012: The Star Trek runabout that Neil built, is actually the repainted version that Paragon made from my original, hand drawn one.

But Neil went even a little bit further than that: the runabouts are kind of the workhorses in Star Trek: Deep Space Nine, and one of their features was that they could swap out the middle-section of the ship, so that they could always bring the right tools for the job (although I don’t remember if they ever really used that feature on the show?)

Neil wanted to recreate that feature in the paper model, and he used magnets to do so! Unfortunately, the magnets that Neil used were just a little bit too weak, so only the cockpit is removable on his build.

But I think the idea is solid and with stronger magnets, it should work great! ;o)

For more pictures and to see how he did it, you can check out the post on his own weblog here: link

And if you want to see some of Neil’s other Star Trek posts and papercraft models he built, you can use this link: link

Thank you for building a (repainted ;o) Ninjatoes’ papercraft model!