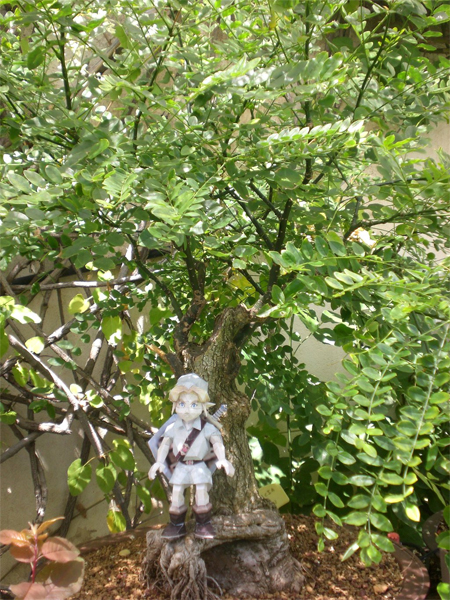 2013-07-01: Javier has been in Rome for a while, and of course he was busy doing other things there than papercraft. ;o)

But now that he’s back, he sent me a new picture of one of my papercraft Zelda models that he built: young Link from Majora’s Mask!

As you can see, Link first went to Kokiri Forest, no doubt to ask advice from the Great Deku Tree. ;o)

To go on a great quest, you need some pocket money though, but luckily in Hyrule money is easy to come by: you just have to cut the grass: picture ;o)

Great job building another papercraft Zelda model again by Javier, and I hope Link has all the rupees he needs now! (because there doesn’t seem any grass left to cut anymore…! ;o)

Or… could it be that it was actually Majora’s Mask that told him to do it to begin with…?

I’m not sure, but fact is that Javier is having second thoughts about building it, because now the evil mask seems to be watching him while he sleeps: link…

15-06-2013: As we suspected, who else but Ganondorf (picture) would have come up with the idea to steal all the colours from Hyrule?

It looks like Link finally found his hideout, and once Ganondorf is done with his “you don’t stand a chance against me!”-speech, we’ll soon see if his adventure has made Link grow strong enough to defeat him once and for all (again)!

Another great build by Javier! ;o)

12-06-2013: Although Javier’s printer’s yellow ink cartridge was empty when he printed the parts to build my papercraft Ocarina of Time adult Link  (I can only suspect Ganondorf is behind it…!) he didn’t let that bother him! ;o)

He built his papercraft Link anyway, and as you can see in the picture, he did a great job: picture

With his Hylian Shield and Master Sword, I’m sure Link will soon defeat Ganondorf and bring back all the colours to Hyrule (as you can see, he already brought back the colour “black“! ;o)

Let’s just hope Ganondorf’s evil colour-stealing plans don’t spread to other worlds, like that of Digimon or Pokémon, but as you can see in Javier’s DeviantArt gallery, so far the crafts he made from those series still have all their colours: link ;o)