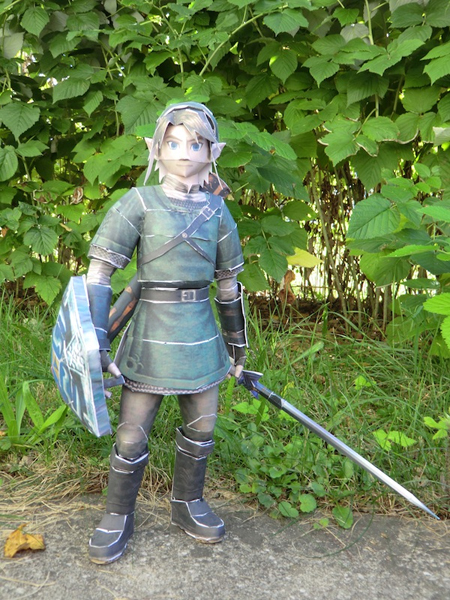 2013-09-05: From the looks of this picture, it seems like Twilight Link has finally found a path into the Kokiri Forest! (or maybe he cut an opening himself with his Master Sword? ;o)

He was built by “eaglechild”, a 46 year old mother of two from Switzerland, who are all huge fans of the Legend of Zelda video games: her 10 year old son handles the controller when they play the games, and she helps him solve the tougher puzzles. ;o)

But eaglechild is practicing playing the games herself too, and she says it’s quite challenging to start playing video games at her age: at first she was too afraid that Link would loose all of his life energy before she even got the chance to hit the enemy, but now she proudly says she can challenge them without fear! ;o)

She found the confidence she needed in reasoning that she can play the recorder too (they actually found my papercraft webpage by accident while looking for Zelda sheet music for the recorder ;o) so she would also be able to handle the Wii remote control to play the games, and she was right! ;o)

And in true Legend of Zelda-spirit, even though they had never done a papercraft project before, she and her 10 year old son rose to the challenge to build their own papercraft Twilight Link together too, after buying good 200 gsm paper and scalpel knives to cut out the parts.

Because it was only their first, beginner project and papercraft Twilight has quite a few small and tricky pieces, they decided to scale him up to 150% (and they are even planning one scaled up to 200%! ;o)

For the glue, they poured all of it from the tube into a small, lockable jar, so they could use thin paint brushes to apply it to the glueing tabs.

All in all it took eaglechild and her son just 3 days to build Twilight Link as their first papercraft model ever: they had some problems with the (very tricky!) fingers not being able to bend the right way to hold the Master Sword, and the handle of the Master Sword wouldn’t stick, but together they were able to find a solution for those problems! ;o)

So together they already learned a lot about papercraft from their first project, and they are very pleased with their achievement; the message they sent me was very enthustiastic, so I think this is one family that will continue to have a lot of fun with the Legend of Zelda series! ;o)