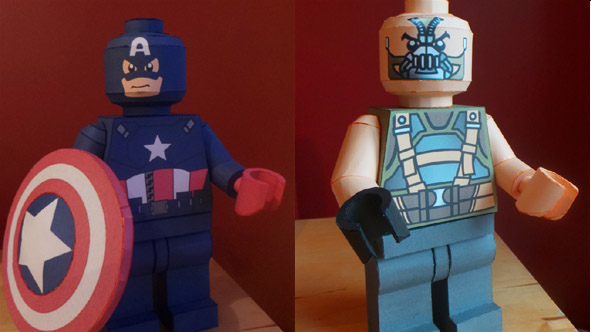 21-12-2013: Those who think contests are a waste of time and you never win anything, guess again!

It took quite a while before the prize was ready to send out, but after three months, Charles finally got the helmet he won: picture ! ;o)

The contest was to build the papercraft Lotus F1 team robot supplied, and then take a funny/cool picture with it, and Charles’ entry had the robot racing a can of Burn Energy Drink, leaving the competition in the dust: picture ! ;o)

Congratulations on winning such a cool prize! ;o)

Charles has sent me the files he made to build them, and allowed me to upload them here so you can download and build them too! ;o)

Charles says Captain America’s shield was kinda made on the fly as he built it, but he included the basic parts, so you can make it the same way he did. ;o)

But it looks like he’s gotten a taste for it, because as you can see, he made another great LEGO minifig repaint already: Bane, from the LEGO Batman series: picture

04-04-2013: There have been repaints of my papercraft LEGO minifigs before, and here’s another really nice one: Captain America, made by Charles Hulbert: picture ;o)

Pretty much every part was repainted to look like Captain America, and as you can see, Charles even made a custom shield!

Thank you for repainting a Ninjatoes’ papercraft model!

Posted on December 22, 2013, in Hall of Fame and tagged LEGO, papercraft. Bookmark the permalink. 9 Comments.