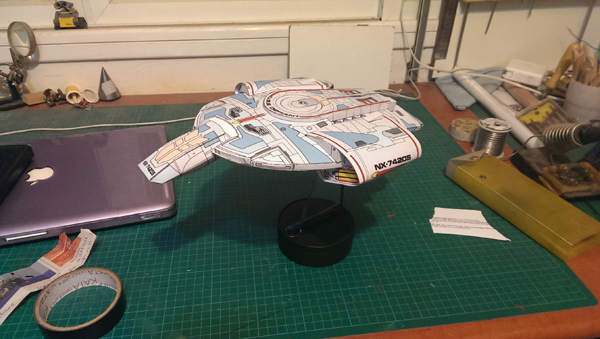 06-01-2014: The picture above shows a papercraft U.S.S. Defiant, built by Shy from one of the repainted versions that Bill Perry and Bones McCoy made from my original hand-drawn and water-coloured version.

But this one picture doesn’t tell the whole story: Shy built over a hundred paper models already, and despite having some problems buildings it, he wanted to make his papercraft U.S.S. Defiant light up with LED lights! ;o)

Have a look at these pictures with all the papercraft parts laid out, and the wiring for the LED lights:
picture 2 | picture 3 | picture 4 | picture 5 | picture 6

And here are a few more pictures with the lights activated in the end:
picture 7 | picture 8 | picture 9

The switch for the lights is on the stand that Shy made for his papercraft U.S.S. Defiant, here’s a link to the video he sent me showing me how it works: http://youtu.be/3hOt-E7T0ig

It looks really marvellous, don’t you think so too? ;o)

07-01-2014: Shy sent me some more pictures of the first “real” papercraft project he used LED lights in, a little diorama of a Battlestar Galactica Re-imagined Cylon Raider and Viper Mark II (from “Jay’s Box of Sci-Fi CardToys” I think?): picture 1

He made it as a birthday gift for his brother, with a light-up Battlestar Galactica logo in the middle of the styrofoam base, and of course, the little spaceships themselves have some LED lights too:
picture 2 | picture 3

Surprisingly, Shy didn’t think the trickiest part was building the paper models or all that soldering, but masking the interior of the paper models (with black tape and paint) so the light would only shine out where he wanted to:
picture 4 | picture 5

And a real learning experience was not to use too many batteries…! ;o)

Because although normally, the more lights you want to use, the more battery power you need, he found out the hard way that you do need to be careful not to use *too* much power…

Most of the LED lights he used needed 3.3 Volts to work, and 2 AAA batteries only have 3 Volts; but he used a 4-pack of them, which gives 6 Volts, and many of his LED lights burned out, so he had to replace them and solder in new ones from the inside which was very difficult… :o(

So he used resistors to lower the voltage, and he grouped together the blue lights and the red lights in parallel circuits (because they use different Voltages) so he can light up the whole spaceships! ;o)

So this was Shy’s first papercraft project incorporating LED lights, but as I said before, he already built many other papercraft models as well; if you want to see some of them, you can do so on his Behance portfolio: link ! ;o)

Thank you for building a Ninjatoes’ (and other peoples’! ;o) papercraft model!