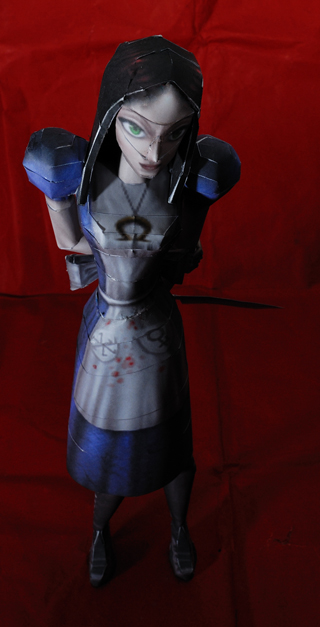 20-01-2014: American McGee’s version of “Alice” was much darker than the famous Disney version, and I think you’ll agree Birdy’s picture does a good job portraying that! ;o)

Birdy really likes experimenting with picture taking, and in fact he tried several different things taking pictures of paper Alice, here’s an example of one of the setups: picture

And if you want to know more about Birdy’s photographic experiments, you can have a look at his Photo Log: link ;o)

Okay, maybe at first it may seem a little bit strange to make a paper model of a “psycho girl” that kills all kinds of scary monsters in a twisted Wonderland, but you can see that I’m not the only one! ;o)

Posted on January 21, 2014, in Hall of Fame and tagged American McGee's Alice, papercraft, Pepakura. Bookmark the permalink. Leave a comment.