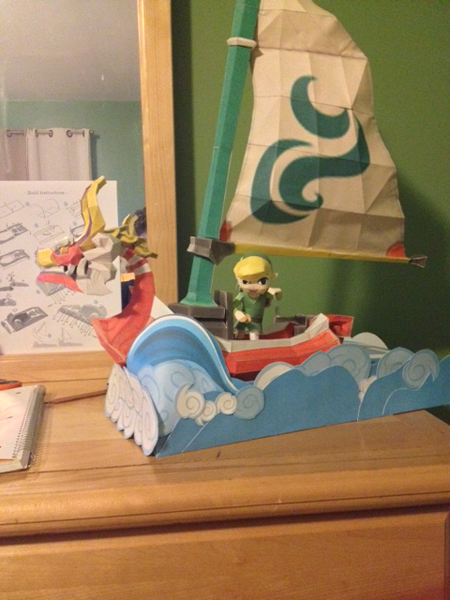 29-10-2014: Kevin built quite a few papercraft models before, but he’s extra proud of his new one: the “King of Red Lions”, from “The Legend of Zelda: The Wind Waker”!

It’s a very challenging model to build, but Kevin spent a lot of time on it, and he even made the special “sea base” and the customized “Chokipeta Link” that Josh Darrah made (link).

05-10-2014: Kevin already built quite a few papercraft models, and here are some new ones!

The first one is adult Link, from The Legend of Zelda: Ocarina of Time: picture

But actually, he built two versions of Ocarina of Time’s adult Link, the other one is the one riding Epona: picture

The next one is from another Legend of Zelda game, namely Twilight Princess, and it’s Link in the Zora armor: picture!

The other two papercraft models are from the Kingdom Hearts series, and they are the main character Sora and his Keyblade and a character featured from the Final Fantasy series, Cloud Strife:

05-04-2014: Kevin sent me bunch of new pictures of the new papercraft models he built since last time! One of them is another Legend of Zelda model, Fierce Deity Link: picture

But this time he also made some Mario models: in this picture, you can see the Paper Mario 3D that I made, but Kevin also built Paperlegend’s Mario 64 (picture) and PaperJuke’s Luigi (picture)!

And because paper models don’t really care who made them of course, PaperJuke’s Luigi and my Paper Mario are getting along quite well: picture ! ;o)

31-01-2014: Kevin is a big time fan of the Legend of Zelda series, and since he liked Twilight Princess, he decided to build my papercraft Twilight Link, and he did a great job too: picture ! ;o)

Where my own paper Twilight Link has his Master Sword and Hylian Shield in his hands, Kevin made it so they are on his back, and it really looks very good: picture 2

Here are two more pictures from the sides: picture 3 | picture 4