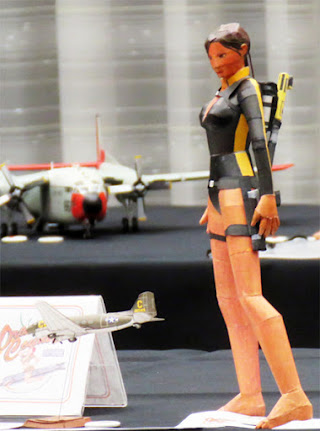 She looks interested in the other models, especially (typical Lara again… ;o) in the planes and tanks: picture 2 | picture 3

But he didn’t just build her “as is”, he used the butt glueing technique (I did an old explanation video about it here: link) to avoid overlapping joints so the final paper model looks extra smooth: picture

And of course: this was the first (and so far only… ;o) model I made with not just separate fingers, but also separate toes: picture

In fact, Bob did such a good job building paper Lara, that after she was finished he thought she actually looked a bit *too* clean! So he gave her a wash of brown water colours, and finally a coat of Krylon Acrylic Clear Matte.

Bob is a member of the PaperModelers.com forum, where you can find lots of paper modeling information and tips and tricks and built examples like paper Lara: link ;o)

(and Lara doesn’t like soda or beer, she likes something a bit stronger… picture ;o)

He used Wausau 90 LB Exact Index for the most part, but that was a bit too stiff for the hair, so for that he used a 20lb paper: picture

Bob edited parts 43 and 45 a bit to enhance Lara’s eh, chest area… ;o) And to make sure Lara wouldn’t fall over, he added some lead weights inside her boots.

Bob’s Lara stands 11 inches tall, with an additional 2 inches for the shotgun, because Bob changed the pose a bit so Lara looks ready for action!

07-08-2013: Bob Penikas did a small paper modeling/soda can demo at the Southern California Area Historical Miniature Society (SCAHMS) meeting last march, and another visitor Steven Lloyd made a video of it and posted it on YouTube! ;o)

In it, Bob explains in detail how to go about using a paper model template to create an aluminium can model and he even mentions my Batman: picture ;o)

11-11-2012: The London 2012 Olympic Games Coca Cola can Batman that Bob made served as a prototype for this second version, made from Guiness beer cans.

With the experience he got from building the prototype Coca Cola Batman, Bob only used one layer for Batman’s cape and made this one a little bit bigger (9 5/8 inches instead of 7 3/4 inches): picture 2 | picture 3

As you can see, the black Guinness beer cans are very suitable for making an aluminium can Batman!

The gold coloured utility belt was made from a Michelob beer can, and the skin tone of his strong, masculine jaw came from an A&W Root Beer can again.

Bob had only just finished his Guinness Batman (literally!) when he took it and his Coca Cola Batman to a meeting of the Southern California Area Historical Miniatures Society (SCAHMS): picture 4

As you can see, the SCAHMS meetings are an event where you can find lots of great miniatures made from all kinds of materials, and Bob tells me got some very good comments on his aluminium can Batmen! ;o)

31-10-2012: Remember those aluminium beverage can papercraft models made by Machaon I told you about a while ago?

Well, those pictures inspired Bob Penikas to make his own aluminium can Batman: picture 1

Bob suggests making him a bit taller than the original to make it easier to make the small parts like the fingers out of aluminium cans instead of paper.

Some parts had to be patched more than he’d like, even though I personally think Coca Cola Batman still looks great! ;o)

Another issue that arose, was that using two layers of aluminium for the cape (front and back) resulted into it being much too heavy and Batman tumbling over: picture 2 :o(

To keep everything together, Bob used Loktite Stik’n Seal Original Waterproof adhesive, but if you know a better alternative, he’s open to suggestions! ;o)

I think Bob did a great job on his Coca Cola Batman, and it’s great to see people inspire each other like this! ;o)

Thank you for building a Ninjatoes’ papercraft model (out of aluminium! ;o)