Batman, Batmobiles and Wall-E by Sunny 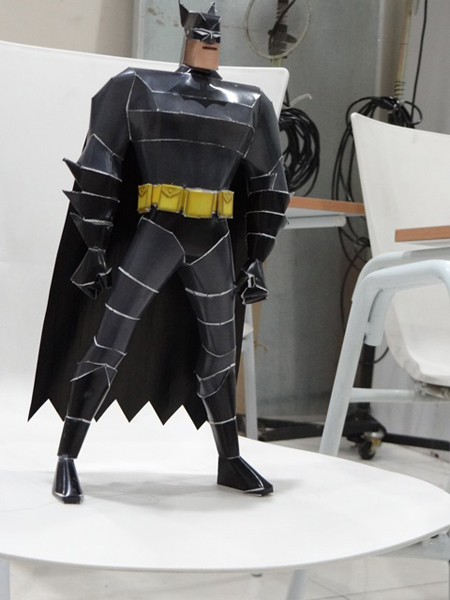 28-11-2013: Besides the two Batmobiles, Sunny Jain also built this papercraft Batman, together with his friends as a gift for another friend!

It’s a nice idea for any Batman fan of course, and I hope their friend liked the gift! ;o)

At one point, Sunny and his friends even thought about using real cloth for Batman’s cape, but because they couldn’t find a proper one, they stuck with paper (and it still looks really good I think! ;o)

24-11-2012: Sunny sent me a whole set of pictures of the papercraft Batmobile that he built from my papercraft webpage: picture 1

The unofficial name is the “Keaton Car“, because Michael Keaton played the role of Batman in the two movies (Batman and Batman Returns) in which this version of the Batmobile was used.

My original papercraft Batmobile was hand drawn and coloured with a black marker, and I made it so that the cockpit roof and the jet engine could be removed, as shown in this picture made by Sunny: picture 2

Because the Batmobile is all black of course, the “white lines” you often get on papercraft models from the edges of the paper, can become extra visible, as you can see in this picture: picture 3

Although Sunny didn’t mention it explicitly in his message, I think he found a great solution to that by painting over his papercraft Batmobile with black paint, because in the other pictures, you can see no more white lines and the whole model looks a single, smooth black, just like the real Batmobile! ;o)

So that’s a great job building his very own papercraft Batmobile, and a great inventivity from Sunny!

Update: Sunny sent me some more pictures of the building process of his papercraft Batmobile!

I always find it very neat to see other people’s papercraft projects too, how a bunch of 2D paper sheets transform into a 3D paper model. ;o)

As you can see in Sunny’s pictures, you really don’t need a lot of tools to build a papercraft model:

Sunny found it very challenging because there were a lot of small parts, and to make it look even better, he touched up the white edges of the paper with black and red colours.

The most troubling parts were the famous double canopy windshields of the Lincoln Futura, because it was very difficult to get the plastic sheets to stick…

But Sunny managed to do it, and here are some of the pictures he sent me (but only a few though, because Sunny really took *a lot* of pictures of the entire build process…! ;o)

Update 13-11-2014: This time Sunny didn’t build Batman or a Batmobile, but Wall-E (from the animation movie with the same name) made by Paper-Replika: link

It was quite challenging says Sunny, which is not difficult to understand when you see all the different parts: picture 3

But as usual, Sunny managed to build a great paper model! ;o)

Thank you for building these Ninjatoes’ (and Paper Inside’s and Paper-Replika’s ;o) papercraft models!