17-07-2010: Dan made this animated gif to show off his Kurt Zisa from all angles! He did the same for his Zora armor Link, but to see that one, you will have to visit his DeviantArt gallery: link

18-04-2010: Dan did a great job building Kotake and Koume! Using a barely visible piece of string, he made it look like they’re really flying around in his room!

At least that’s what I think he did; for his sake, I hope they’re not real witches…!

17-12-2009: This is Dan showing off his freshly mown lawn. ;o) He didn’t say though whether he did it himself, or that Link has a bag full of Rupees, Potions and Hearts right now…! ;o)

22-11-2009: Zora armor Link is Dan’s first build from Twilight Princess. He said he took extra care building that one and it really paid off, because it looks “really good!”

20-11-2009: By now, Dan has plenty of papercrafting practice! ;o) Printed off and assembled in just two days, Dan’s other models don’t seem to be scared by his new Oogie Boogie (maybe they know it’s just a paper one…?)

05-09-2009: Speaking of Dan’s other models, this Kurt Zisa really is a great build: it looks wonderful, but that’s not surprising because he had a lot of practice! ;o)

06-06-2009: Taking a break fom building Final Fantasy models, Dan also built not on, not two, but several of my Zelda models! In the picture he sent me, you can recognize young Link, princess Zelda herself, Majora’s Mask and the Clock Town Schnauzer of course.

I know you’ve never seen the darker dog, because that’s Dan’s own recolor of the Clock Town Schnauzer to make it look like the common ones found at night at Hyrule Castle in Ocarina of Time!

02-06-2009: And here’s another one for Dan to be proud of: it’s Cloud Strife Kingdom Hearts style! It’s looking at least as good as Auron, maybe it has something to do with the motivation he got from watching his brother play Final Fantasy 7 while he built it? ;o) 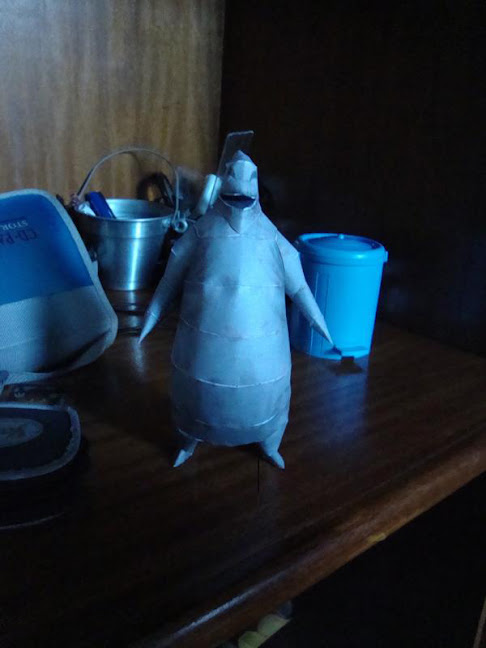 07-03-2010: 14 year old Felipe Rossi from Brazil had only built Cubees and Hamheadz until now, and Oogie Boogie is the first more complex paper model he (successfully) made.

He says it’s far from perfect but I’m sure he’s just being modest, because it looks pretty good to me! ;o)

Thank you for building this Ninjatoes’ papercraft model!