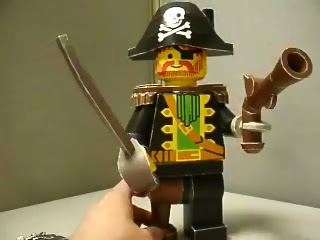 It not only looks great, but it’s nice and strong too (which is very important if you’re gonna be taking the pieces apart and putting them back together all the time… ;o)

But instead of just a simple video, Chris made a very comprehensive review on his Youtube channel. It’s almost 10 minutes long, and he has some very good tips on building it!

Here’s the link if you want to watch it too: chris24jc’s video review

Thank you for building (and reviewing ;o) a Ninjatoes’ papercraft model! 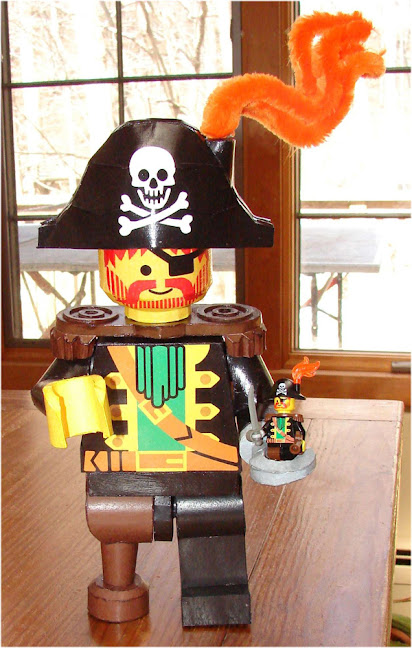 Earlier, Jonathan Leslie already did an absolutely amazing job building the “Going Merry”, and now he also made my LEGO pirate Captain Redbeard!

Where do I start? The reason why it’s so shiny for instance, is because he coated the model with “Mod Podge” as a clear finish: picture

He also reinforced all the hollow parts with tissues soaked in glue: when the glue dries, the tissues will become hard and form a sort of honeycomb structure inside the parts: picture

That way, hopefully it will have a better chance of surviving when being played with by young kids! ;o)

You already noticed the feather plume, of course: I didn’t include one in the paper model, but Jon made one out of pipe cleaners: picture

And last but not least: Jon went on Bricklink and got himself a real LEGO Redbeard minifig!

He made a (not-so-secret ;o) compartment for it in the back of the leg (he even had to made extra room for the feather): picture 1 | picture 2

Like he did with the “Going Merry”, Jon made a great build page again with lots more pictures of the techniques he used: link

So there you have it: an excellent customized version of Captain Redbeard (a.k.a. Kapitein Knoest)!

25-09-2006: Jonathan Leslie is what you call a “space enthustiac”. He has his own website, The Lower Hudson Valley Paper Model Giftshop, where you can download a lot of nice science fiction and space papercrafts (it’s also the d/l mirror for the Defiant redraw).

Jon has a lot of experience building all kinds of paper models, and this time he built the “Going Merry”!

The rigging is made by soaking thread with “cyanoacrylate glue”. This hardens the threads and bonds them together, as you can see in his “Going Merry” WIP pictures.