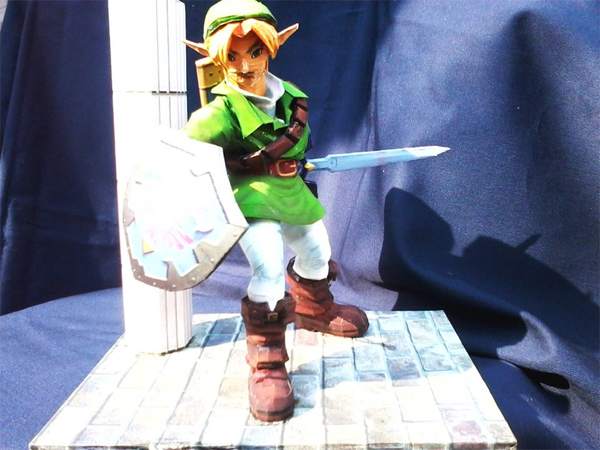 09-10-2013: Despite my Super Smash Bros. Melee Link being the most challenging papercraft model I made so far I think, there are many people that did a very good job building him! ;o)

It really has *lots* of very small parts and pieces, but as you can see, WickedPaper did a great job too: he even made his own custom, more square display base for Melee Link to stand on, and I think it fits really well! ;o)

Here are some more pictures of WickedPaper’s papercraft Melee Link from different angles:

02-10-2013: WickedPaper showed me this great picture of my papercraft Battlestar Galactica Viper Mark II that he built on his Facebook profile: picture 1 !

He tells me he had fun building it, and you can really see that I think, because the end result looks very good! ;o)

And I think the red background cloth makes for a very nice picture! If you like it too, here are some more: picture 2 | picture 3 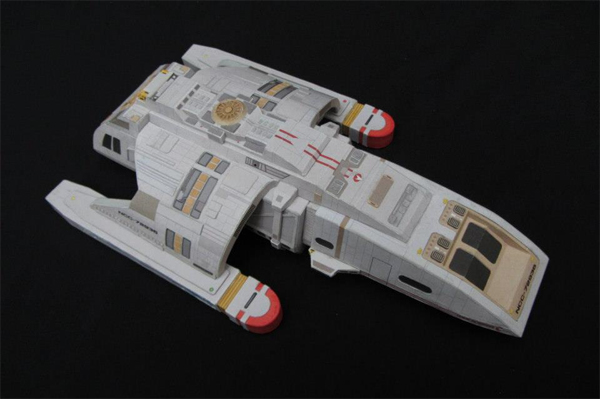 18-04-2013: Did you know that Loenf likes science-fiction movies and series? Well, maybe all the papercraft models he likes to build should have been a clue! ;o)

My originally model was drawn by hand and coloured with aquarel, and it was huge! ;o) Although the repainted version is the same size, Loenf printed it at half that size to make a smaller, 260 mm version: picture 2 | picture 3

And with all his experience as a modeller, Loenf also made a very neat technological looking display stand that really suits the model: picture 4 | picture 5

So yeah, what more to say? It’s a great job by both Paul McCool and Loenf! ;o)

30-11-2012: Here’s a surprise for you! (or maybe not so much, if you have been following Loenf’s papercrafting threads on Papermodelers.com: thread 1 | thread 2 ;o)

Loenf had already re-vamped and built my papercraft Star Wars TIE-fighter a little while ago, and he had promised to tidy up the templates he used and share them with the rest of us, but he also made a TIE-interceptor version: picture 1 !

The TIE-interceptor is an updated version of the TIE-fighter, with more fire power, greater speed and higher maneuverability thanks to the dagger-like wings that also give it its extra menacing look…

Loenf put a lot of work into re-vamping my original, papercraft hand drawn TIE-fighter model and he did a great job so I’m sure you’ll like it! ;o)

The biggest difference in Loenf’s re-vamped models is in the wings, but he also simplified the cockpit interior a bit, and instead of making a movable top hatch, he made it so that you can simply glue it down.

Loenf didn’t re-draw all the glueing tabs, so don’t forget to cut your own! (or create your own method to join the parts together ;o)

You can get the parts and instructions to build Loenf’s re-vamped TIE-fighter and TIE-interceptor directly from my papercraft webpage in my original TIE-fighter post here: link

And Loenf also plans to upload the files to the Papermodelers.com and Zealot forums: link and link

If you do decide to build it, Loenf would love to see the result! ;o)

03-11-2012: If you already saw Loenf’s work on my papercraft Battlestar Galactica Viper Mark 2 and Cylon Raider, you will not be surprised with the great work he did on my papercraft Star Wars TIE-fighter too: picture

Unlike my Battlestar Galactica models though, the parts for my papercraft Star Wars TIE-fighter were all drawn by hand and coloured using aquarel.

But because Loenf wanted it to have a computer-made look, he did a lot of work re-drawing and re-painting all the parts on the computer first!

He also modified the wings a bit, making them a little thinner, and reinforcing them with some corrugated cardboard to increase their stiffness.

Not surprisingly, he did a great job, as you can see for yourself: picture 2 | picture 3

Loenf’s has also uploaded some more pictures of his re-drawn TIE-fighter (and lots more great papercraft models he built!) to his Loenforama site: link

Loenf also posted his re-drawn TIE-fighter pictures in the Paper Modelers forum: link (you need to be a member there to see the attached pictures, though)

29-01-2011: After his fantastic build of my Battlestar Galactica Viper Mk.2 model, Loenf now also made the Cylon Raider: picture 1

Here’s another picture of the two together: picture 2

He found the wings a little bit difficult to build, he says, but I think they look great now, and here are some more pictures to prove it! ;o)
picture 3 | picture 4 | picture 5

Update: if you want to see more pictures of Loenf’s Viper Mk.2 and Cylon Raider, you can visit his Loenforama website, with several more papercraft dioramas from series like Aliens, Star Trek, Star Wars and more!

It was done by Loenf, and not only did he a fantastic job building it, he also modified the cockpit so you can look inside!

He used transparant foil for the canopy, and built the cockpit interior himself completely from scratch!

Here are some close-ups of the cockpit and engines:
picture 3 | picture 4

You can read a bit more about his modifications on PaperModelers.com, but you can’t view the pictures there unless you are a member, unfortunately… 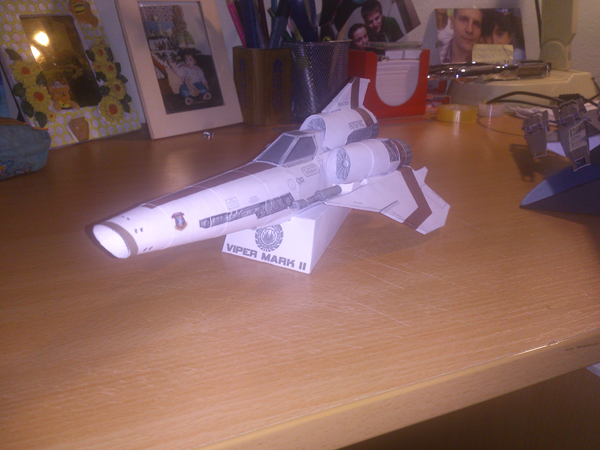 This one was built by Josip: he said he found it fairly difficult to build, but now thatit’s finished, it’s beautiful and he’s very proud of it!

And I think he’s right to be proud, because from the pictures he sent me, it looks like he did a great job building it! picture 2 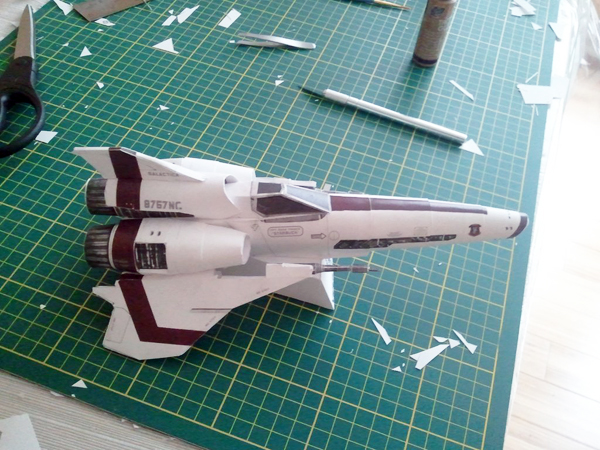 02-08-2012: Dan just started papercrafting, building with a few simple, “blocky” models before moving on to my Tomb Raider T-Rex trophy.

After that, he decided to build my Battlestar Galactica Viper Mk.II, of which you can see the picture above! ;o)

He was using 60 lb paper for his papercraft Viper, and he was making such good progress, that he skipped making the reinforcing, internal framework out of heavier cardboard, but as you can see, it turned out very good! ;o) 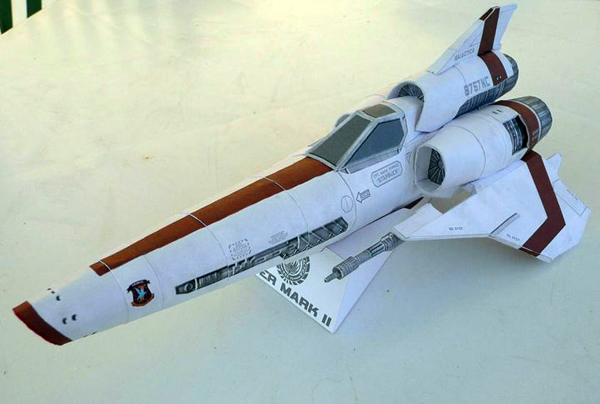 06-06-2011: Stanislav from the Czech Republic sent me some pictures of the Battlestar Galactica Viper Mk.II that he built!

It’s only the third papercraft model he built since he was a kid, he says, but I think he did a great job!

Here are two more pictures, so you can see for yourself: picture 2 | picture 3