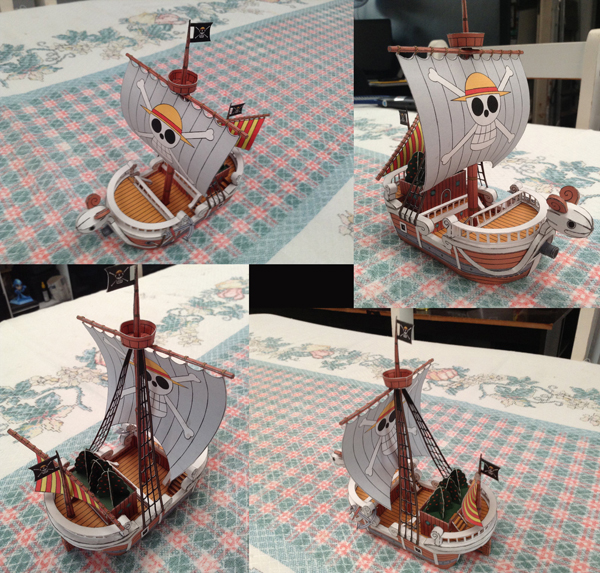 12-12-2013: thithou made this papercraft “Going Merry” that you see in this nice little photo collage as a Christmas present for his cousin, and he did a very good job, so that will be a very nice surprise I think! ;o)

He found it a little bit difficult to work with all the small parts, but even so it only took him about 4 days to finish! ;o)

He even changed the horns on the figurehead to a brown colour, and instead of printing the shrouds coming from the mast on a transparant sheet, he decided to make them a little wider so he could make them from paper too.

Before the “Going Merry”, thithou already made several other paper models, including the “King of Red Lions” from the Legend of Zelda series:
picture

And although he didn’t really have any trouble building it, after a while, the figurehead and the mast and sail proved to be a bit too heavy and they started to fall off… :o(

thithou was able to glue on the figurehead again using some extra strong glue this time, but for the mast, he made the difficult decision to carefully remove it completely and rebuild it by printing new parts again.

This way, he could put in some barbecue sticks on the inside for extra strength, and as you can see, it worked really well! ;o)

If you want to see some of the other papercraft models that thithou built, you can have a look at his DeviantArt gallery: link 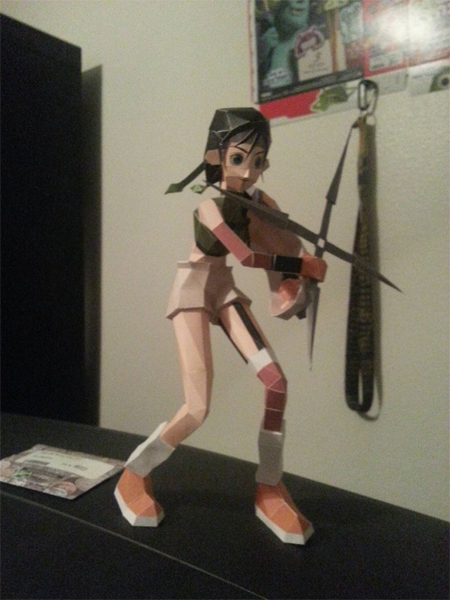 14-12-2013: Yuffie is the newest Final Fantasy character I made so far, and as you can see, Shaun liked her so much that he decided to build her too! ;o)

I think most parts aren’t too difficult, and Shaun found the parts layout and the instructions very helpful, and he did a very good job:
picture 2 | picture 3 | picture 4

If you want to see bigger versions of these pictures, you can do so on the Imgur gallery that Shaun created: link